From the construction, the main scientific objective of the observatory is the study of minor bodies of the solar system, in particular minor planets. These are objects of the rocky nature that revolve around the Sun at an average distance of 450 million kilometres placing generally between the orbits of Mars and Jupiter. The greater asteroid (Ceres) has a diameter of about 1000 km. There is no limit to the small planet smaller, with the main telescope of our Observatory; we are able to observe planets up to a minimum diameter of about 5Km. 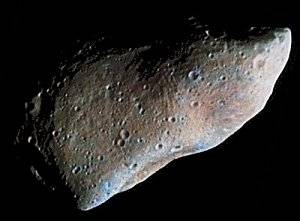 The astrometry work consists in an accurate measurement of the position of the minor planets known and in the search for new objects, it means, that they have never been observed before. These studies were initiated as CCD cameras and programs reduction data were not available, we then used the hyper sensitized film photography, measuring instruments and calculation developed at our observatory.

In a photographic image, also run with big telescopes, the planets appear point like and are not distinguishable from the stars. To be able to locate them is necessary to exploit the fact that the planets rotating around the Sun moving in the sky. In two photos of the same area of the sky, separated by about 30 minutes they changed the position of the planets among the stars. Using a tool called "Blink" that allows observing alternately the two photographs and the asteroid strikes the eye. It sounds easy but photographs taken with the Schmidt telescope provide films circular of 8 cm in diameter on which can be found from 10,000 to 100,000 stars. Scan those takes hours.

The two previous images have been performed at a distance of 30 minutes, framing the same areas of the sky, with the CCD camera Starlight HX516. In the frame there is a minor planet, are you able to detect it?
Here you can find the blink of the two images

Once the minor planet is found a micromertic measuring is done with position relative to other stars used as reference. In this way it is possible to derive the position on the sky. The measurements are sent to the Minor Planet Center that collects from all over the world information on small bodies in the solar system and the public on the Minor Planet Circular (MPC). When a new asteroid is discovered it will be assigned a provisional code (the discovery year of followed by a note). After a time which can be from 3 to 10 years, collected a sufficient amount of positions to be able to calculate a certain orbit, the Minor Planet Center catalogues the asteroid and the discoverers can choose the name.

The hundreds of observations made have allowed us to arrive at the discovery of four new minor planets:


In the late nineties and early years of 2000 were brought into service the large survey as Catalina Sky Survey and Lincoln Near-Earth Asteroid Research. This survey aimed to find planets possible Earth impactors have radically changed the global landscape of this type of research. The minor planet were known about 3000 in the early 80s, have become 10000 to the mid-90s, today the number is arrived at more than 300,000 and the ride does not seem to stop. This revolution has drastically reduced the possibility of new discoveries of asteroids by Amateur astronomers with telescopes from 30-50 inches.

Friends of other observatories we have collaborated with have honored us with these dedications:


A heartfelt thanks to friends of Pianoro and San Vittore

On site NEODyS it is possible to sort all the measurements performed on Near Earth Object from 1990 to 2011.

Astrometric measurements performed between the years 1983 and 2010.