Since 2011, after the implementation of full observatory automation it was possible to activate the program follow-up of Gamma Ray Burst . These explosions in the gamma rays produce enormous amounts of energy, such as to be visible at a distance cosmic for short periods of time ( from a few minutes to a few hours ). At the same time flashes occur in visible light called "afterglows" also lasting a few minutes. It 's impossible to plan ahead so the observation of GRB. To work in this field is necessary to collaborate with the NASA team that coordinates the activities of the satellites that detect GRB events. To this purpose NASA has established a network of observatories called Gamma- ray Coordinates Network to which the Observatory of Bassano Bresciano was associated. Whenever a satellite reveals a GRB phenomenon, NASA collects and analyzes information quickly and automatically notifies all observers of the network events worthy of being observed. In this way the astronomical observatories which are in condition visibility and operation can be performed observations of the hot phenomenon.

Every night when the observatory is operating with a session of osservazionni automatic, are continuously monitored GRB alert notifications that NASA sends over the network. When an alert is detected, the computer observatory assess whether the object is sufficiently above the horizon in order to be observed. If the test is successful, the computer stops the ongoing observations, automatically points the GRB and began to photograph it for the rest of the night. 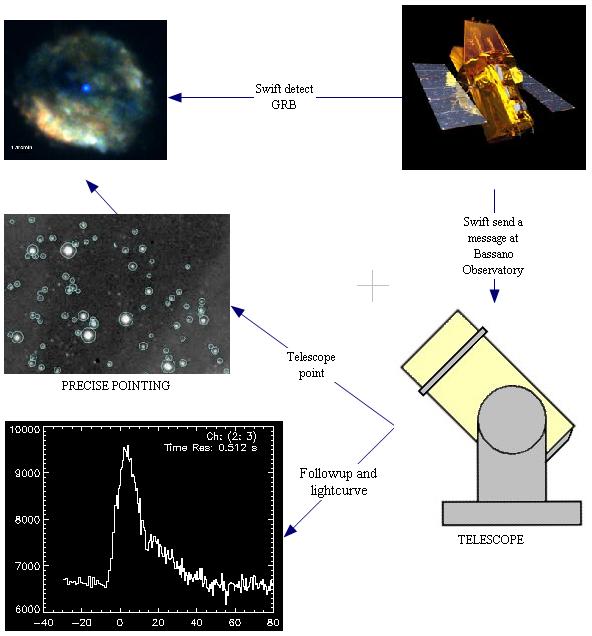 Once analyzed and measured the images of the GRB observatory in turn sends the results via the network GCN Circular.